It’s been a while since I’ve been able to sit down and write an article; pulling sixteen hour days between law school and paying the bills, and somehow fitting in running a rescue, has not left much time for my creative muse. Plus, let’s be real – law school will suck your soul out through your nose and leave you feeling akin to something frightening from an AMC show. Never fear, though. I’m still around and pissing off fun-sponges and armchair quarterbacks just as well.

What am I going to hit y’all with today? Well, actually, I’m going to be nice for a change. Believe me, there are plenty of snarky rants dancing like sugar plums through my head, but in the spirit of Christmas, I will save those for the New Year. Today, I want to make you cry, and then I want to make you get in your car and go save a dog’s life.

Before I get to the nitty gritty, I need to tell y’all a story. A few weeks ago, I got my daily email loaded with photos of all the dogs and cats sitting in my two largest local animal control facilities. As usual, I opened and scrolled straight to the bottom, so I could see the new editions. Immediately, I noticed the Boykin (if you don’t know what a Boykin is, go here later). It was an awful photo, like all the shelter photos I tend to get, but I recognized him immediately and sent a text within the next thirty seconds to the director of the nonprofit that sends out this daily digest.

Two days later, I had the smelliest dog ever in the back of my car. Within two minutes, he shit bloody diarrhea all over everything, but than goodness I only had a few blocks to go to get home. I wasn’t even upset – this dog was at least twelve years old, blind as a bat, emaciated, and could barely walk straight. Green slime crusted his eyes shut and his nose looked like a desert, it was so dry and cracked. Shit, I thought. Give him a week, maybe a month. 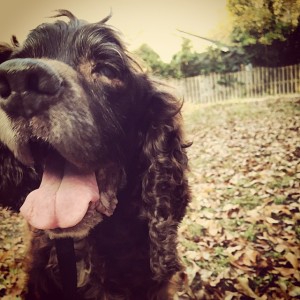 And such is the glamorous story of how I came to own my sixth dog. Sullivan, he is named, has now been with me almost a month. It took two weeks to clear up the respiratory infection, and he’s slowly putting on weight. With the help of twice-weekly medicated baths, his skin is softening and his fur is growing back (it took four baths to get rid of the stench of weeks-old urine). At first, Sully didn’t even acknowledge my existence. Now he comes when called, if you say it loud enough. He loves his softy, squishy bed, and likes to find me and press his head into my legs and touch my hands with his nose. He tries to look at me when he hears my voice, but he can’t see anything.

I have always had a soft spot for old dogs, since my experience with Tala. This year I pulled a seven year old Great Dane named Cyrus from my local shelter, and a blind senior cocker spaniel left by her owners at Miami Dade animal control. Sometimes they find homes, like Tala. Cyrus has a foster home who loves him and understands that he may be theirs forever. Roomba, my goofy little Florida cocker, was adopted just last week – I truly expected her to be with me for her entire life, too. 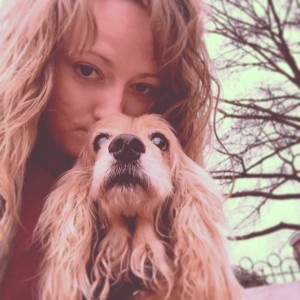 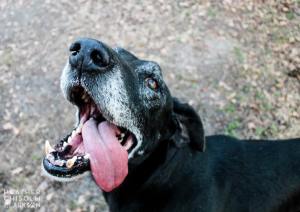 Sullivan is old, and Sullivan is going to die. It could be tonight. He could be lifeless when I come home today from work. He could live another six months or a year. And when he does die, I am going to be absolutely heartbroken. I am going to cry and it’s going to tear me up inside as if I had owned Sully since he was eight weeks old. It doesn’t matter, though, because every single minute Sully spends in my home is worth all the heartache I could ever imagine.

There’s a special place for people who dump old dogs. There’s an even more special place for people who stick their old dogs outside to rot for months – years, maybe – before they finally succumb to the pain, or, like in Sully’s case, somehow by the grace of Dog escape that hell and get lucky enough to find solace. But, like I said, I’m not here today to bitch about those people. They exist, there’s nothing we can do about it, and I sincerely hope that when they are old and frail, their children leave them to rot from bed sores and dementia in nursing homes.

The silver lining to all of this is simple: we can do something to make these dogs’ lives better. We being me, you, and all dog lovers and rescue advocates. Anybody with space in their home to fit a soft, warm dog bed and enough money to spare to feed an extra mouth. Old dogs don’t do much – they sleep, they eat, they go to the bathroom. Some of them are spry enough to enjoy tagging along on a walk, but others, like Sully, are too weak and wobbly to go far and would rather just sleep all day. They don’t even need much as far as vet work goes. I did a routine blood panel on Sullivan just to get a baseline, and I paid for antibiotics and prescription wet food that would be easier on his stomach. But nobody is asking you to spend a fortune on testing and medications, and cancer or heartworm treatments. All these dogs need is love.

It’s really, really easy. Get in your car and drive to your local shelter. Ask them if you can see their available senior dogs. Go pick one out – you’ll find them in all shapes and sizes. Then, take them home, give them a bath and a good meal, and love the hell out of them. Rinse and repeat. These dogs have done nothing but give their hearts and souls to humans for their entire life. No matter what kind of terrible person left them to die, they don’t deserve to spend their last days on a cold, wet concrete floor surrounded by the stench of feces (probably covered in it, too) and the cacophony of barking. They deserve to sleep on a warm bed, feel the kind touch of a human hand on their head, and die with a little goddamn dignity.

And you know what’s really, really cool about all of this? After you’ve taken your sweet old dog home and loved it, and it passes on to the other side, you can do it all over again.

13 thoughts on “Merry Christmas! Now let me break your heart.”